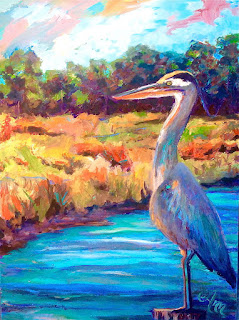 In the liturgical calendar of the Roman Rite, a solemnity is a feast day of the highest rank celebrating a mystery of faith such as the Trinity, an event in the life of Jesus, his mother Mary, or another important saint. The observance begins with the vigil on the evening before the actual date of the feast. Unlike feast days of the rank of feast (other than feasts of the Lord) or those of the rank of memorial, solemnities replace the celebration of Sundays outside Advent, Lent, and Easter (those in Ordinary Time). The word comes from postclassical Latin sollemnitas, meaning a solemnity, festival, celebration of a day.
Posted by Bob Girth at 10:59 AM No comments: 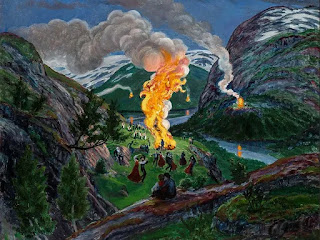 Midsummer is the period of time centered upon the summer solstice, and more specifically the northern European celebrations that accompany the actual solstice or take place on a day between June 19 and June 25 and the preceding evening. The exact dates vary among different cultures. The celebration predates Christianity, and existed under different names and traditions around the world. The wealthier sort also before their doors near to the said bonfires would set out tables on the vigils furnished with sweet bread and good drink, and on the festival days with meats and drinks plentifully, whereunto they would invite their neighbours and passengers also to sit, and to be merry with them in great familiarity, praising God for his benefits bestowed on them. These were called bonfires as well of good amity amongst neighbours that, being before at controversy, were there by the labour of others reconciled, and made of bitter enemies, loving friends, as also for the birtue that a great fire hat to purge the infection of the air. On the vigil of St John Baptist and St Peter and Paul the Apostles, every man's door being shadowed with green birch, long fennel, St John's Wort, Orpin, white lillies and such like, garnished upon with garlands of beautiful flowers, had also lamps of glass, with oil burinin in them all night, some hung branches of iron curiously wrought, containing hundreds of lamps lit at once, which made goodly show
Posted by Bob Girth at 1:50 PM No comments: 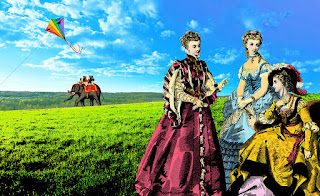 Fly a Kite Day takes place on the anniversary of the date in 1752 when Benjamin Franklin flew a kite in a thunderstorm, with the intent of proving that lightning was caused by a discharge of electricity (some sources say he flew his kite on June 10). His experiment led to further understanding of positive and negative charges, the proving that lightning was an electrical discharge, and to the invention of the lightning rod—which provided a safe way to discharge electricity and a way to prevent fires. Lightning rods are still used today to protect buildings, ships, and people.
Posted by Bob Girth at 11:32 AM 1 comment: 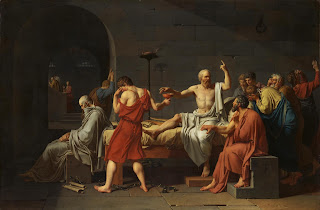 In modern parlance, “name your poison” is a phrase most commonly spoken by a bartender when they ask a patron what type of drink they are having. Name Your Poison Day is a day dedicated to making decisions and choices, whether they be among good or bad options. But, since “poison” is in the phrase, there is a negative connotation and more often than not the day is about choosing among various bad options. This is a great day to go to the bar and “name your poison”. If you are a bartender, this is the phrase you should be using all day to ask patrons what they want to drink. If you have other vices or poisons that you indulge in, today you get a free pass. If you are a smoker, go to a gas station and name what brand of cigarettes you want. Go to the most unhealthy restaurant and “name your poison” there as well. It’s okay, you can get the the double bacon cheeseburger with a side of bacon. This is also a good day to listen to 80’s hair metal band Poison, or the Alice Cooper song “Poison”. It’s a good day to watch the film Poison, or Arsenic and Old Lace
Posted by Bob Girth at 6:41 AM No comments: 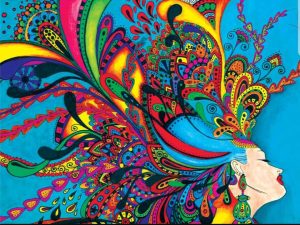 CHAI, Chicano Batman, Thao & The Get Down Stay Down, I Break Horses

Whistler’s Mother is a painting done by James McNeill Whistler. It’s actually called Arrangement in Gray and Black No. 1. It was done by an American artist who resided in France. It’s kind of a somber painting with an overwhelming sense of the proper and staid. Not a whole lot of nurturing motherhood emanating from the painting but something intriguing nonetheless. I particularly like the curtains as they have so much detail and life. The severe protestant look of the woman is contrasted by the beauty and textures around her.
Posted by Bob Girth at 8:20 PM No comments: 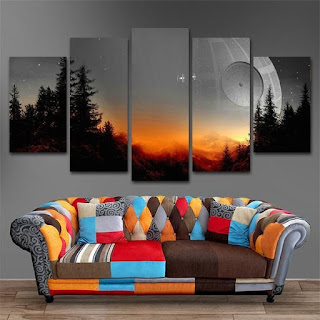 Star Wars Day celebrates the film series Star Wars, which was created by George Lucas. The eponymous-titled first film of the series was released on May 25, 1977. Later gaining the title Episode IV: A New Hope, the film became a worldwide cultural phenomenon and helped usher in the concept of the blockbuster movie. It was followed by The Empire Strikes Back (1980) and Return of the Jedi (1983); these three films made up the original trilogy. A prequel trilogy was released between 1999 and 2005, and a sequel trilogy began being released in 2015. All of the films were commercially successful, and there have been spin-off films to the series as well. Star Wars became a franchise, and books, games, television series, and more have been produced under its name. Star Wars merchandise has also been very successful. May fourth was chosen as the date of Star Wars Day because of the phrase "May the fourth be with you," which is a pun of the phrase "May the Force be with you"—a phrase used multiple times in Star Wars films.
Posted by Bob Girth at 4:20 PM No comments: 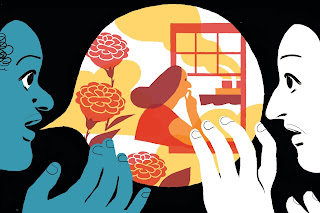 Tell a Story Day celebrates story-telling of all kinds. It doesn't matter if its fiction or non-fiction, a tall tale, or folk lore. Today is a day to tell 'em all. Stories can be from a book, other written material, or from memory. Our research discovered two distinct holidays, one in the U.S. The other is in Scotland and the UK. The latter is by far more prominent and organized. These two holidays are exactly six months apart. Libraries celebrate this day with story telling hours for kids. You can enjoy today telling stories to your kids, family members, or organizations and groups that you belong to.  Make Tell a Story Day an important and pleasure-filled experience. To enhance the enjoyment of the story, try setting the atmosphere. If it's an eerie or spooky story, turn down the lights. Bring decorations and memorabilia that speak to the theme. If its about a person, display a picture of the individual.
Posted by Bob Girth at 8:54 PM No comments: